How to Master: Modern Design

Modern design, despite its namesake, is heading toward its 100th birthday. It began in the early 19th century and became popular for its stark contrast to common traditional interiors. Here we explain exactly what modern design is and how you can use it in your home.

The origins of modern design

The modern interior design movement gained popularity in the 1930s and continued to influence and evolve interior design well into the mid-century. Think Mad Men 1960s inspired living spaces. It was loved for being different. At the time, everything about it was new – from the shapes to the materials. Steel, moulded plywood and plastic were a steep departure from the upholstery fabrics and heavy dark woods of traditional furniture. It marked a departure from what was expected, into an exciting future where change was possible.

One of the striking things about modern design is its use of both earth materials, like wood or leather, and sleek elements, like glass or polished metals. It fuses the two seamlessly to present warm, innovative spaces that are equal parts natural and futuristic.

In modern design, every space feels endless, flowing into another. While open-plan living has been popular for some time now, it was brand new to early modern designers. To truly embody modern design you’ll need large, open spaces that serve multiple purposes; like kitchen/dining/living in one.

Straight, sharp structures are the epitome of modern. Rectangles and squares are the shapes of choice, while round features are used sparingly; if at all. Lines also feature in the wide windows and flat ceilings that embody modern architecture.

There is no room for superfluous decoration and ornate detailing in modern design. Rooms are made for efficiency, without losing any comfort. On the contrary, their simplicity is inviting as it keeps things clean and uncluttered for the senses.

Pro Tip: Minimalism is an asset when property styling as it allows future homeowners to imagine the space as their own.

Embrace modernity with our interior team

Modern design was more of a movement than a single design style. It embodied the break between what we now see as antique style and the new, burgeoning future of living. It’s one of the more difficult styles to master and our team are always happy to help. Call 1300 387 647 or enquire online for help elevating your spaces to their full potential. 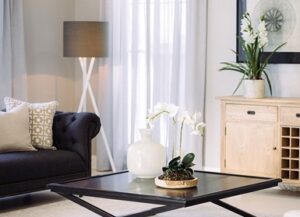 Style Tips For Your Study 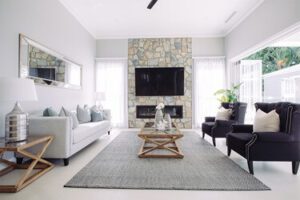 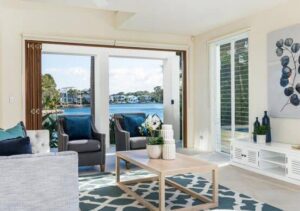 Is Property Styling Worth the Money?